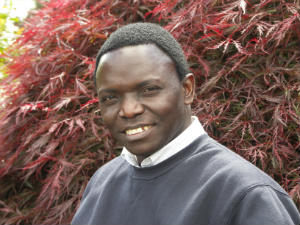 My name is James Bogere, I am married to Phoebe, and we have three children (Esther Kisakye, David Mwesigwa and Daniel Mulungi).

My story of coming to know Christ as my personal saviour is quite a long one, but I will be brief. I was born in Uganda, and hail from a Christian family. Church has always been part of my life. While growing up I attended Church of Uganda (equivalent to The Anglican Church). I was baptized as a baby. My grandparents were Christians and my parents were church goers. However, as I was growing up the question ‘who is God’ was always in my sub conscious. Yet I would not dare ask such a question to my grandmother who would brand me a ‘spoilt’ child. In fact as children we used ‘to get saved’,in order to gain favour from our nanny. My nanny kept telling me about the love of Christ and would ask me to surrender my life to Christ, this paid off later on in my life.

How? I continued questioning the reality of God at the same time taking a stand that I knew God was there but I also thought that being committed to Him by accepting Jesus Christ as my saviour would make me somewhat fanatical. And when I studied science at the university I had come to the conclusion that I know all there is to know about nature and God.

But one day, a work colleague invited me to what was to be my turning point from death to life. I attended a workshop where such questions as; who is God? Does God exist? If God exists, why does mankind suffer? It was a residential workshop for a week away from my home town. My intention was to attend the Saturday day session only and go away. It was not to be, I later believed that the Lord had a plan for me because my friend asked me to stay that night only. He explained to me that he had to go and buy more food in town which was a bit far off from where the workshop was held, and so would not be back in time for us to go back home. That night, Saturday night, I was convicted by the verse: Roman 1:20 “For since the creation of the world God's invisible qualities, his eternal power and divine nature, have been clearly seen, being understood from what has been made, so that men are without excuse” and I surrendered my life to Christ. It has been a journey of learning and continuous obedience since then, obviously with failings here and there, but God being there to hold my hand and lift me up.

When I came to the UK I was introduced to the Woodside Baptist church South Norwood. In July 2004 we moved to this area and joined Modern Park Baptist Church in September 2004. In 2005 I became a member of MPBC. I got baptized in 2006 here at MPBC. In 2007 I was elected by the membership to join the deaconate. This is a noble position that has given me a chance to give back to God some of my time and energy for His service. It is my desire to keep learning and getting better to serve the people of God. At times I feel like I am not up to the task, yet I desire to do what I should do.

Colossians 3:23-24 “whatever you do, work at it with all your heart, as working for the Lord, not for men, since you knows that you will receive an inheritance from the Lord as a reward. It is the Lord Christ you are serving...... “